“The redesign is focusing on how we can keep that initial idea, but how we can adjust it so that the city doesn’t require as much maintenance, and people can use [Public Square] in a better way… For us, it’s an investment in how we can create a place for the next 40 years that works for these functions. We know it’s worked for the last 40 years. With a little bit of maintenance and a little bit of care, we can revamp these things, keep our history, and then design something for the next 40 years.” -Nicholas A. Snyder, AIA, Senior Associate at Bohlin Cywinski Jackson

Watch Nicholas Snyder talk about Public Square’s original design, and how Bohlin Cywinski Jackson plans to built upon this foundation in their future redesign project.

America’s Best Communities: How Can YOU Support Wilkes-Barre?

Businesses, non-profits, community members, and college students in our area have been blowing up Facebook, Twitter, and Instagram with #ABC50 in support of Wilkes-Barre’s progress in the America’s Best Communities competition! 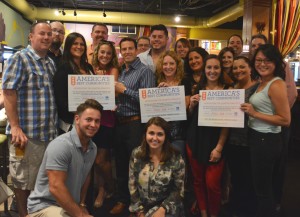 CoalCreative digital marketing agency and Terry Clemente’s Contemporary Business Skills class at Penn State Wilkes-Barre have been working with the Chamber to lead an engaging social media campaign to rally the community. 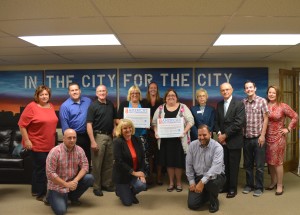 Many have responded featuring pictures of their businesses with our America’s Best Communities signs, “selfies” with these signs, or text posts supporting our area and promoting the competition.

WNEP just published a great piece on local involvement, which can be found here.

How can YOU get involved? Make a post! Post to your Facebook, Twitter, or Instagram account to say that you are proud to support the City of Wilkes-Barre in their efforts to be named America’s Best Community, and include some of your favorite things about Wilkes-Barre! Just remember to set your post to “public” so that the ABC Social Media Team can see it too!

Visit our site to access downloadable images that you can include in your posts, learn about even MORE ways to get engaged, and find more information about the competition, and our revitalization strategy-which was shaped by the community!

Located on Franklin Street in downtown Wilkes-Barre, the Frederick Stegmaier Mansion is a gorgeous model of High Victorian architecture in the River Street Historic District.

A focal point of historical rehabilitation, the Frederick Stegmaier Mansion was restored to its former glory by current owner Joseph Matteo.

The building was the former home of the Stegmaier family, who are still recognized worldwide for their “Gold Medal” beer.

Their legacy is carried on in our area through continued production of their famous brews.  The mansion remained in the Stegmaier family for over 35 years, until it was purchased by Joseph Matteo.

In addition to Charles Stegmaier, the mansion has had only three other owners. It was originally constructed in approximately 1870 by local architect Missouria B. Houpt. He stayed in the building for 29 years, when it was purchased and maintained by Abram Nesbitt until 1906.

The first floor of the mansion contains the entry foyer, ladies’ parlor, gentleman’s parlor, library, dining room, and kitchen. The second floor contains the mansion’s overnight rooms and suites, including Amelia’s Suite, the Gold Medal Room, the 1857 Lager Room, and the Brewmaster’s Suite.

Arts, culture, dining, and entertainment are a huge part of Greater Wilkes-Barre. In Public Square alone, there are over 40 diverse restaurants within walking distance-including Asian, French, Indian, Italian, Mediterranean, and Mexican cuisine. Our area is also home to many great entertainment establishments like the F.M. Kirby Center for the Performing Arts, the Wyoming Valley Art League, and the Little Theatre of Wilkes-Barre, to name a few.

Watch below to learn about the these establishments’  history and current projects, and see the wide array of dining options available downtown!