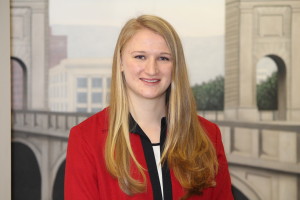 Casara McCleaf is a sophomore at Wilkes University double majoring in math and computer science. She is an economic development intern at the Greater Wilkes-Barre Chamber for the Spring of 2015.

Where are you from?

I grew up in a small town between Gettysburg and the Mason-Dixon Line called Carroll Valley, Pennsylvania.  I now live in Sturdevant Hall at Wilkes University, of which I am the Resident Assistant for the school year.

What do you hope to do after college?

After college, I hope to settle down in a small town filled with farms and friendly people.

I would settle down and live in NEPA for the rest of my life if I found a good job and my family was happy here.

Why did you choose Wilkes?

I almost went to Duquesne, but decided to go to Wilkes University because they offered a greater number of majors that I was interested in besides Pharmacy.  I also greatly appreciated the small-size of the campus and the close-knit community.  Also, my brother attends Wilkes University, so he was a major part of my decision to go to Wilkes.

I wanted to stay within “short” driving distance of my house, so I only looked into schools in Pennsylvania and Maryland, and choosing Wilkes is what brought me to NEPA.

I chose to change from Pharmacy to a dual major in Mathematics and Computer Science because I have always had a passion for math and knew that my logical reasoning and math skills could pair nicely with the widely sought after computer science major.

What are your impressions of NEPA?

My first impression of Wilkes-Barre was that it was a city, there was a lot of buildings and only a little grass.  This was a stark change from my hometown.

Most people I know from this area talk about the pizza.  When I first told people I was going to go to Wilkes, they all told me “the place to go for the best pizza”.

When I leave here, I will remember this area most for the experiences I have had here and for everything I have learned while I was living here. I will remember the city for the accessibility of its stores, most of which are walking distance from campus, and its frigid winters.

What do you hope to do when you graduate?

When I graduate, my dream job is to work as a cryptographer.  I would love to work for the National Security Agency.

Are there any businesses you wish were in NEPA?

I wish someone would open a coffee shop which delivered coffee and baked goods in NEPA.  If I could create my dream job, it would incorporate math with helping people with special needs or children with bad home-lives.
Want to become a Greater Wilkes-Barre Chamber Intern?
Apply NOW for Summer 2015 at internships@wilkes-barre.org